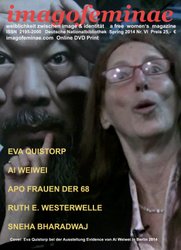 Image: from the Music Video "FEUERFRAU" by SNEHA BHARADWAJ ©Sneha Bharadwaj 2014 FeuerFrau: the music video made by Sneha Bharadwaj is about female power and  the art of indian classical dance. 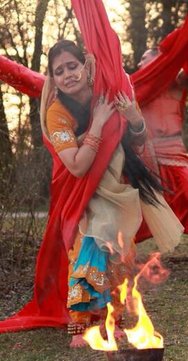 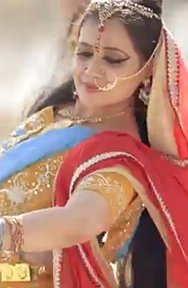 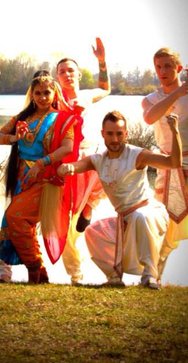 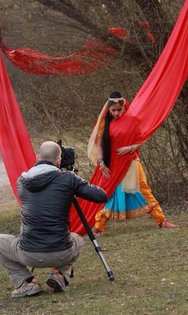 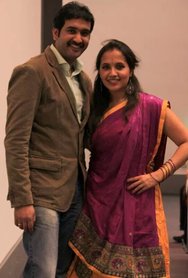 together with her husband Sandeep Kashyap. "He has been a great support to my art" says Sneha with a joyful voice!   image: ©Sneha Bharadwaj 2014 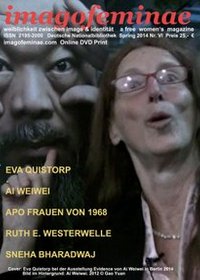 Graduated in "Bharata Natyam"   from the college of  fine arts in  Bharathidasan University- India,  the artist Sneha Bharadwaj is one of the young  experts of this indian classical dance  in Germany. Starting at the age of 7 under the guidance of Guru Sri H.K. Raj, she learned Tanjore Style of Bharata Natyam for more than 7 years, later obtaining her training from Guru Smt. Narmada and Guru Pulikeshi Kasturi.

The education continued with studying Psychology, giving it up to fetch a degree in Choreography where she was subjected to indepth study of art, dance, Ornamentation of Indian Classical Music, Art History and Stage Craft at Bangalore University- Natya Institute of Kathak And Choreography by Guru Dr. Maya Rao.

"I had many opportunities to perform various challenging roles in various  Indian Ballets and also presenting my choreography works on Historical, Mythological, Sanskrit and Contemporary Ballets" says Sneha Bharadwaj, who had appeared once at stage  together with  the legendary Padamashree-Award winners    Dr. L. Sumbrahmaniam (Indian Violinist,  Composer & Music Condoctor) and  Kavitha Krishnamurthy (Classical Indian Singer).

Skyping  with her Gurus in Indian   Bangalore, Guru Sri Guru Murthy, Guru Sri Jyothi Lakshmi and Guru Pulikeshi Kasturi, she is  in permanent contact with the origins of  her art. Sneha  Bharadwaj has  appeared at many   Indian, German, US and  International TV channels & media. She was  invited to perform in Berlin by the former Indian ambassador to Germany and the current India's Foreign secretary Mrs Sujatha Singh. Sneha is  representing  "Abhinaya Indische Tanz" in Munich  since 2011, teaching and training children and adults.

In this interview with imagofeminae, she is speaking  about her music video FeuerFrau, indian women, violence against women and  her message as an artist to the soceity.

imagofeminae: What is female power or Shakti?

Sneha Bharadwaj:  Shakti means “scared force or empowerment”. It  is a personification of divine feminine creative power. A mighty feminine force which every women has to imbibe in her life to fight against the evil energy. Shakti can bail us out from illusion and conquer immortality or emerge victorious from its initiatory. If  one immerse oneself in the world of dance I believe the art form can grant a level of freedom and autonomy.

Sneha Bharadwaj: "FeuerFrau" is an Indian theatrical & Dance Production as I dream to stage it sometime soon... this video is a teaser for my Production. It is a story of power, revolt, courage, beauty and honour. It is an amalgamation of two classical dance forms and the contemporary dance forms: Indian Classical,  Bharata Natyam and Ballet. Mahabharata is a 5000 year old Sanskrit epic of India. FeuerFrau is the unique form of interpretation of the epic Mahabharath which emphasizes the importance of a women. It is a story told by  a great women's perspective:   Draupadi, a woman who is one of the Panch-Kanya (The Five Virgins) of the ancient Hindu epic. The Indian traditional ideals are communicated in Bharata Natyam, maintaining the purity of the classical form, and utilizing innovation within the classical context.

imagofeminae: Is  violence against women an issue for you as an artist?

Sneha Bharadwaj:  violence against women  is indeed very disturbing as a women, as an Indian citizen. As an artist, it hurts me to read about these gruesome incidences around the world. Hope there is soon an end to this Barbarism. My last project was called Sammilana-Shakti, presented by Ballerina Franziska Angerer and       Myself.   Through our dance we talked about rape and violence against women. We showed how a women can tackle the situation. My main dream for women in India is that they imbibe Shakti (self defense) in their lives  & continue to fight against all odds & not to sit back. Dance definitely brings self-confidence, power and positive relationships. When pure dance and divinity manifests within you, it transforms and transcends  inside to an elevated experience. Dance helps women identify their risks and evaluate their strengths. Now with my new project FeuerFrau I continue to carry out the message "Shakti" in much higher scalus. FeuerFrau is unique form of interpretation of the epic  Mahabharath which emphasizes the importance of a women.

imagofeminae:  What is the roll of women in   Bharata Natyam?

Sneha Bharadwaj: women play a very important role in this art form.  Bharata Natyam,  one of the most important traditional Indian dances, was performed only  by Devadasis or maids of God  in temples  untill the early 20th century.  Devadasis were the traditional practitioners of this dance form and handed it over through the ages. Dancers like Nagarathnamma, Venkatalakshmamma, Balasaraswati and  Rukmini Devi Aundale have played a vital role in revival of this  dance. It has travelled a long way from temples to Royal Courts by praising the Kings to proscenium stage.

Bharata Natyam, which originates from the state of Tamil Nadu in south India, is one of the most popular classical dance styles in India.

imagofeminae:  Who is the  Composer     of the music in "FeuerFrau"?

Sneha Bharadwaj: the music for this  production has been directed by one of the leading young musicians from India Manjunath N.S. who has a great power of bringing the both indian and european  classical musics  together and make it sound as ONE.

imagofeminae:       What is the social aspekt of your art?

Sneha Bharadwaj: I simply aim to use dance and theater to reach various audiences about a multitude of social issues; from violence against women upto religious intolerance.  Dance,   as my artistic work, is a  communicative phenomenon and it has the power to send     and    to  receive messages  through nonverbal movements. Dance    is a unique  social    interaction that    sends both intentional and unintentional messages. A choreographer has to be very careful while planning a dance sequence and make sure he or she gives the right message. Dance has the ability to reach people in a way that rhetoric alone often fails to do. Art can go through spaces where other things can't. It breaks through your prejudices and everythingelse  which you have as your mask. In a world where attitudes are so difficult to change, we need a language that reaches through. 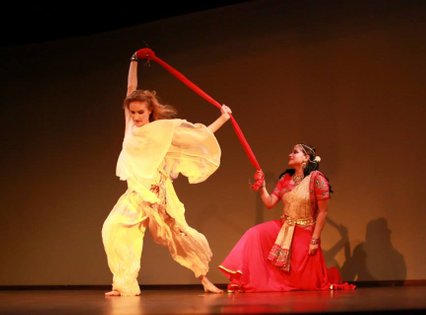